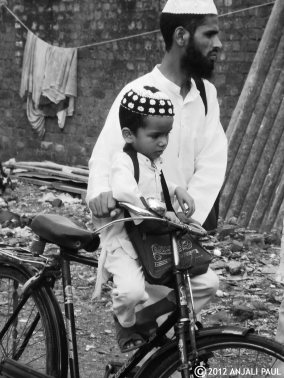 This was shot during a college assignment in 2009 where we were sent to study a nearby slum and propose a rehabilitation setting for them, as they were being forced to move out of their squatter settlements which had served as their homes for more than 10 years. This was shot in the Iqbal Nagar Slums which is in Surat where I did my Bachelors in Architecture. Surat is 5 hours from Ahmedabad and is dubbed the 4th cleanest city and the fastest growing city in the country.

Despite the circumstances they live in, the residents of this settlement appeared happy and content and this was clearly visible by this father who appeared to be fighting poverty by spirituality or religion as he took his son to the mosque on Friday. The little child sitting on the bar of his father’s cycle was the epitome of innocence and ignorance of the truth that surrounded him…filth, gloom and negativity. I bring a philosophical angle to almost anything as you can clearly see but this is a picture which I treasure because this father son duo touched a religious spot in me somewhere.