I absolutely just had to blog about this today because this was absolutely adorable and also because I think I am becoming highly maternal, much too evident for my comfort! 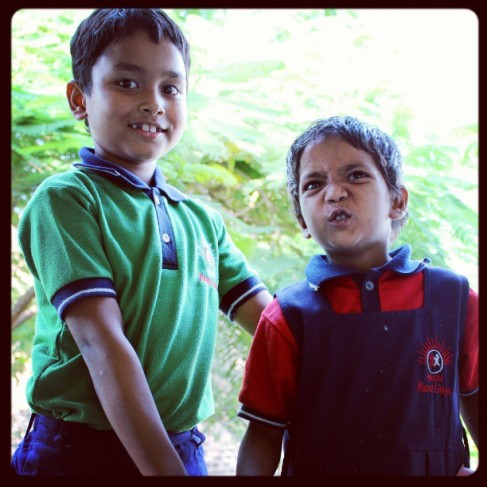 I’ve got this kid in school who is my favourite (I know we aren’t supposed to have favourites but we shall make that an exception for me) and her name is Khushi 🙂 She comes and sits next to me on the bus and talks to me about random things in a broken dialect of the local language and HIndi which is as difficult enough to understand as it is. She heads over to my room post her classes which gets over an hour earlier than the rest of us and plonks herself down next to me, trying to look as busy and important as any 4 year old tries to believe she is, colouring and drawing vaguely shaped objects which she says is me. (I’m constantly worrying whether I’m putting on weight when I see the elasticity of those objects).

As any other day would have it, she came and plonked herself right next to me with markers, drawing as usual. I was a little skeptical when I saw those markers and how close to me she was sitting (I was wearing one of my favourite light grey sweatshirts) and hence swapped them with sketch pens. My little Van Gogh drew something which looked like ‘flubber’ (remember the movie?) and then kept asking me to look at it. When I turned, her hand moved and her sketch pen drew a very nice mark on my sleeve. Before I could react and she could undo the same, she had drawn two more lines on my sleeve! I stared at my sleeve and then at her with my mouth gaping open, only to hear her say… “Didi, ruko!” (Sister, wait!) I wasn’t mad at her really but I really wanted to know what she was going to do and I watched as she pulled out a cloth and tried to wipe away the mark from my sleeve. I was trying so hard not to laugh and hug her as she very diligently tried to wipe off the marks with her rag (which she also uses as her handkerchief by the way). When she saw that it clearly wasn’t working, she went rummaging through her bag which sometimes seems like an endless pit and fished out an eraser which she declared with triumph… “Rubbad!!” I watched in absolute amusement as this 4 year old tried as hard as she could to wipe away those marks with an eraser!! When she realized that it clearly wasn’t working, she told me very innocently that it normally works and tried to erase the marks from her nails (kids like to colour their nails with sketch pens).

I stared in bemusement and wondered why this tiny little girl’s antics suddenly seemed more important than my favourite sweatshirt. I laughed as hard as my body could muster and she was a little scared for my sanity, I think as she slowly distanced herself away from me.

Kids teach you a lot of things and yeah… I think I learnt how to forgive today. Is it strange that this strange act made me happy?! Happy that I could forgive and happy that I could laugh at something which would have normally made me very upset?!

She is as right as her name isn’t she?! Khushi!! (Hindi for happiness) 🙂